Mohiniyattam – Dance of the Enchantress

Mohiniyattam, is an Indian classical dance form that was developed and remains popular in the state of Kerala.

Mohiniyattam gets its name from the word Mohini – a historical enchantress avatar of the Hindu god Vishnu, who helps the good prevail over evil by developing her feminine powers. Mohini refers to a divine enchantress or a supreme seductress. She appears in Hindu mythologies during a battle between Devas (good) and Asuras (evil), after the evil had won control of Amrita (nectar of immortality). Appearing in her youthful bloom, dressed rapturously she uses her charms to seduce the Asuras, who seeking her favors, give her the Amrita to distribute among the evil forces. Mohini after gaining the Amrita gives it to the good instead, depriving the evil from gaining immortality.

Mohiniyattam’s roots, like all classical Indian dances, are in the Natya Shastra – the ancient Hindu Sanskrit text on performance arts. It follows the Lasya style described in Natya Shastra, that is a dance which is delicate, eros-filled and feminine. It is traditionally a solo dance performed by women after extensive training, though nowadays men can also perform the dance.

Mohiniyattam is a lasya subgenre of dance, performed in the Kaisiki vritti (graceful style), as discussed in ancient Indian performance arts texts such as the Natya Shastra. More specifically, it is a dance that excels in Ekaharya Abhinaya form, that is a solo expressive dance performance aided by singing and music. The dance includes nritta (pure dance, solo), nritya (expressive dance, solo) and modern productions sometimes include natya (play, group dance):

The basic posture of Mohiniyattam is parted feet, knees bent outwards, an erect upper torso, gentle 8-shape side to side swaying of body along with hips (Ati Bhanga). The footwork is soft, sliding and synchronous with the musical beat and acting. The body movement is sometimes described in terms of calming images of nature as the swinging of the palm leaves, and the gentle undulating of ocean waves.

The basic dance units in Mohiniyattam are known as atavus or atavukal, and these are grouped into four: Taganam, Jaganam, Dhaganam and Sammisram. The hand and facial gestures of the dance follow the classical text of Hastha Lakshanadeepika, which has elaborate description of mudras.

The repertoire sequence of Mohiniyattam is similar to that of Bharatanatyam, so of contains seven items that are performed to a structure described in classical dance texts: Cholkettu (invocation, but starts with offering reverence to a goddess Bhagavati and ends with a prayer to Shiva), Jatisvaram or more precisely Swarajeti, Varnam (a play wherein she embeds a mimicry for distraction while communicating the underlying story or message), Padam (song), Tillana (dancer’s interpretation of melody the musician create), Shlokam and Saptam.

The costume includes plain white or off-white such as ivory or cream colored sari embroidered with bright golden or gold laced colored brocade (similar to a ceremonial Kasavu saree). She wears a fitted choli (blouse) matching the sari, below which at the waist is a golden belt which tucks in the end of the sari, and highlights the waist. In front of the saree, below the belt is pleated sheet with concentric bands in gold or saffron colors, which allow freedom of movement and assist in visually communicating the mudra to distant audience. 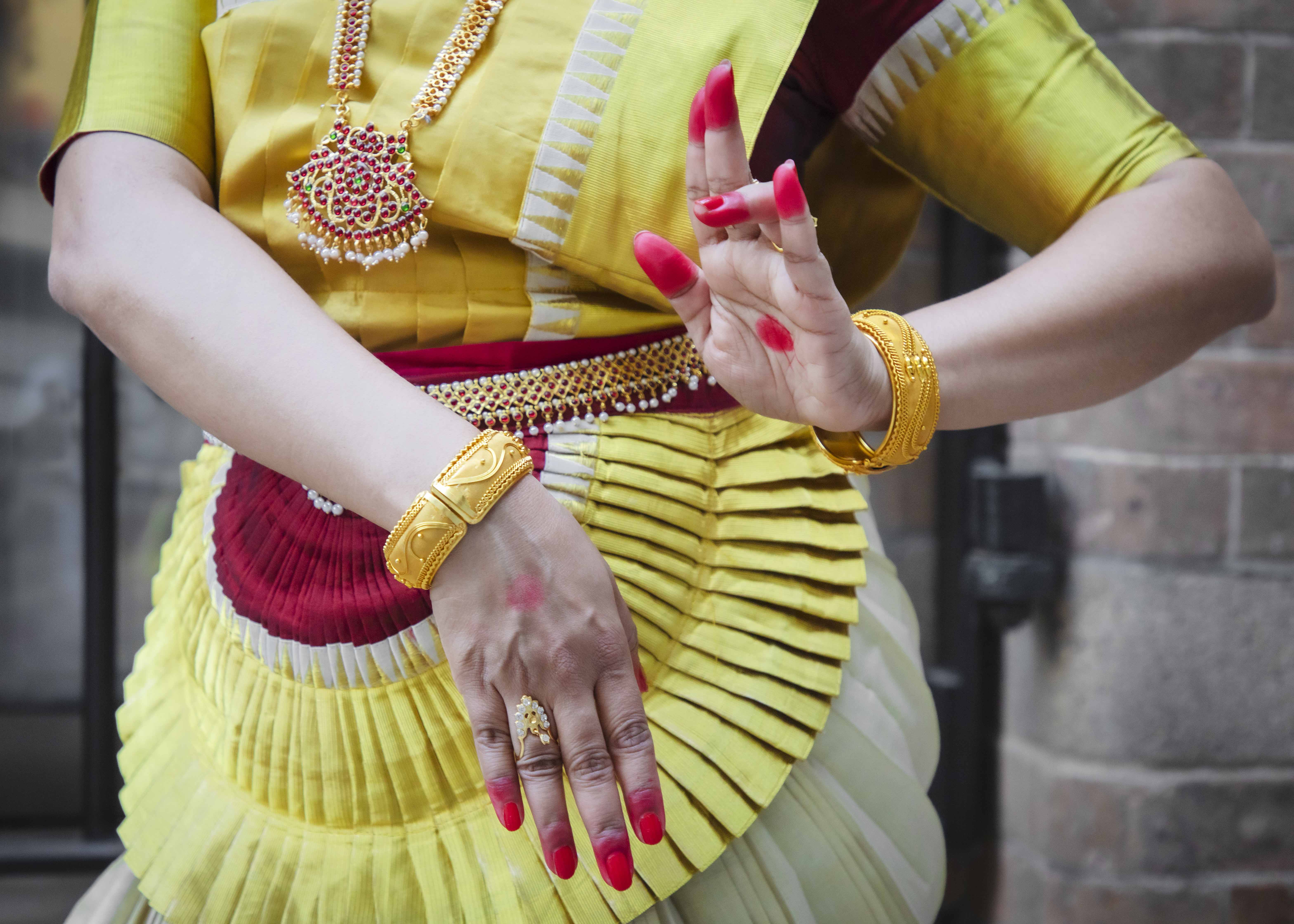 The dancer wears relatively simple jewelry and no masks, in contrast to the other major classical dance of Kerala called Kathakali. Her jewelry typically includes items on fingers, wrists, neck and ears (which may have bells). The face makeup is natural, but lips are brilliant red, she has the Hindu tikka (Gobi) on her forehead and her eyes are lined to help prominently highlight the eye movements during the dance. Her ankles are adorned with leather straps with bells (chilanka), feet and fingers colored red with natural dyes. Her hairdo is gathered and tied into a smooth tight round chignon on one side of her head (typically left) and the bun then ringed with fragrant flowers (typically jasmine mulla).

The vocals (music) of Mohiniyattam involves various rhythms. There are numerous compositions for a Mohiniyattam repertoire, most of whose lyrics are in Manipravalam, a mixture of Sanskrit, Tamil and Malayalam.

The musical instruments usually used in Mohiniyattam are Mridangam or Madhalam (barrel drum), Idakka (hour glass drum), flute, Veena, and Kuzhitalam (cymbals). The ragas (melody) are rendered in the sopana (steps) style, which is a slow melodic style with roots in the Natya Shastra. 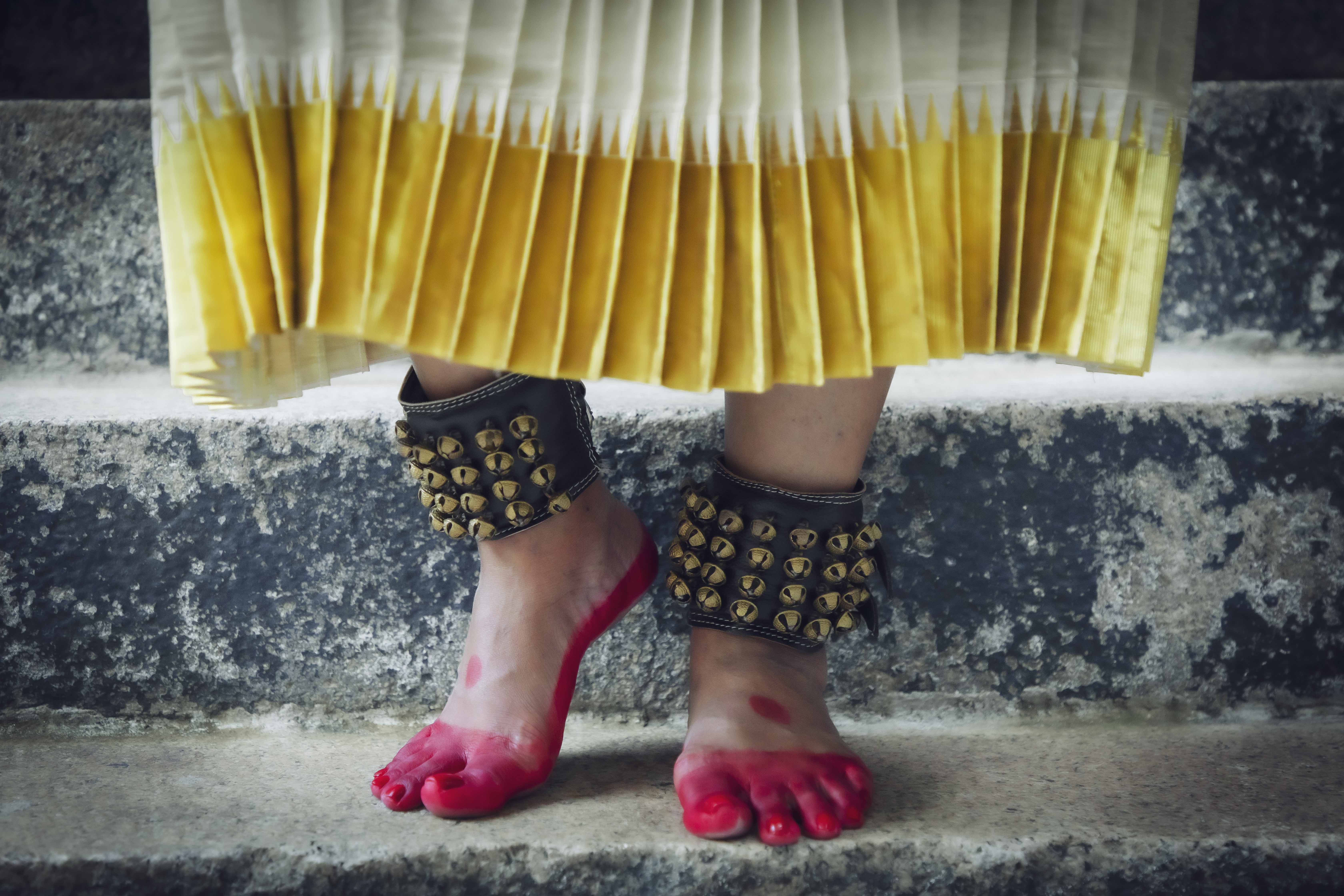 Want to learn more about Mohiniyattam?

If you are interested in learning more about Mohiniyattam, come join us